Hayden Panettiere has dumped her boyfriend of two years, Wladimir Klitschko. The actress cites distance as the problem. But maybe their height difference had something to do with it. 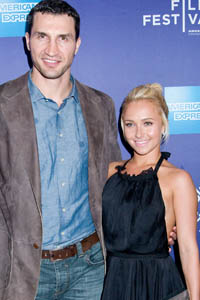 Pint-sized Hollywood actress Hayden Panettiere has dumped her ginormous Ukrainian boxer boyfriend Wladimir Klitschko after two years. The Heroes starlet and the boxing giant always seemed like something of an odd couple. Panettiere, 21, is 5-foot-1 while Klitschko, 35, is 6-foot-5.

Panettiere confirmed the split in a statement: “While we decided to split, we feel great sympathy and respect for each other and will surely stay close friends.” Klitschko cited distance as the reason for their separation: “We had a great time together. But more and more we realized how difficult it is to maintain a relationship when living on two continents.”

Earlier this year, Panettiere talked about how the couple made it work — in the bedroom. On The Ellen DeGeneres Show, the petite blonde revealed even strangers asked about Panettiere’s sex life with Klitschko. “I get the prudest people coming up to me and they’re like, ‘Does it work?’ Yeah, it works. We find a way.” She added, “Where there is a will, there is a way!”

“I cherish Hayden as a person and woman,” Klitschko said. “I’m sure we will stay friends.”