The Oprah Winfrey Show is preparing to usher out 25 years of greatness, but she’s not doing it alone. The queen of talk has been counting down her last shows with some big names that you don’t want to miss. 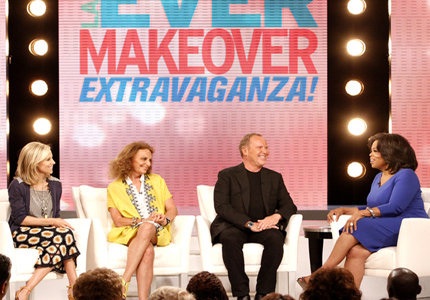 Have you ever wondered what it might be like to have super-designer Michael Kors dress your body? Well, the guests of Oprah’s “Last Ever Makeover Extravaganza” got to find out. Kors joined an expert panel that also included Ken Paves, Diane von Furstenberg and Tory Burch in delivering the biggest, last makeovers in Oprah Show history.

From police officers to a former male guest with a giant beard, they all got the full fashion overhaul. But it wasn’t just about the hottest style trends. One unsuspecting hair disaster took her head of curls from frizz to fab in a matter of moments with the Oprah Show magic makeover!

Oprah Winfrey wasn’t about to let Michael Kors, Tory Burch and Diane von Furstenberg have all the fun. She invited one lucky guest into the holy land of fashion — her closet! What’s inside the closet of the world’s most powerful woman? Shoes, shoes and more shoes, people! Oh, and the dress she met the president in. But we were focused on the shoes.

We know what you’re waiting to hear. She gave away a whole new wardrobe to the audience, right? Not quite. But the audience did get a killer bag from Kors, sophisticated scarves from von Furstenberg and summer-fun sunglasses from Burch!

Are you sad to see Oprah usher out her last makeover show? Tell us what you thought!