Prince has reversed his decision to ban an erratic Whitney Houston from his shows after her bizarre behavior left his people cold. 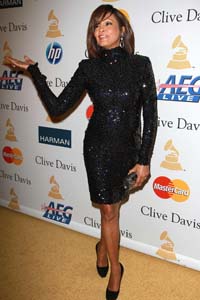 Last week wasn’t the greatest that Prince’s greatest fan has ever seen. First, Whitney Houston headed to rehab after what was surely a spectacular relapse, then Prince banned the singer from his concerts because of her erratic, bizarre behavior.

Sources say Whitney badgered Prince’s people for free tickets, then during the concert hounded them until she was allowed up on stage, where she shakily sang a few lines of a song before Prince firmly escorted her off — and had to prompt the crowd to clap for her.

Whitney and daughter Bobbi Christina, who has her own drug troubles to deal with, then made a spectacle of themselves in the front row dancing far more enthusiastically than was appropriate while disturbing other concertgoers.

Prince’s people then had to put their collective foot down and ban Whitney from his shows!

But Prince must have had a change of heart — the woman is trying to get her life together after all — and issued a statement inviting Whitney back any time.

“Whitney Houston is always welcome at Prince shows 4 all of eternity. Seeing her at 2 shows at The Forum in LA was a treat, especially when she sang with Chaka Khan and danced with Prince during his set.”

“We love her always.”