CBS executives offered Charlie Sheen’s Two and a Half Men bowling shirts to an unlikely British actor: Hugh Grant. Is he signing on? 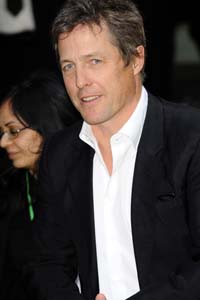 Two and a Half Men goes British? That’s the story coming out from insiders at Warner Bros. It seems that actor Hugh Grant was approached to take over Charlie Sheen’s role on the super-popular CBS show.

“The show was in talks with Hugh Grant to become the new lead,” a source told People. “And wouldn’t it be brilliant if it were so?”

Yes! We’re floored by the mention of Grant in Sheen’s place — but we’re totally into it. Grant has the sort of cheeky past (remember that one incident with a “lady of the night” back in the ’90s?) that would be perfect for the role. He’s cleaned up his act since then and now tackles adorable roles in films like About a Boy and Did You Hear About the Morgans?

Deadline first reported that Grant will make at least $1 million per episode if he signs on to the show, a number that Warner Bros. insiders dispute.

“Any actor brought in to the show will not [make] anywhere near [$1 million per episode],” the insider told People.

No word on whether or not the deal is still in process, but insiders are predicting that a replacement for Sheen will be named by CBS’ advertiser upfronts on May 18.

We’re hoping — praying, really — that Grant gets the role. Other actors previously rumored for the role include John Stamos and Rob Lowe, but we really, really, really want Grant. Why? We love him (obviously) and Stamos and Lowe are already all over television with roles in shows like Glee and Parks and Recreation.

The biggest question: Will Sheen’s replacement take over as Charlie Harper, or will a new character enter the show? Also, will Grant keep his British accent or put on an American one for the show?

Do you think Hugh Grant has what it takes to be one of the Two and a Half Men?