Sofia Vergara has been tapped as the new face of CoverGirl! What makes the Modern Family actress the perfect choice? Read on to find out! 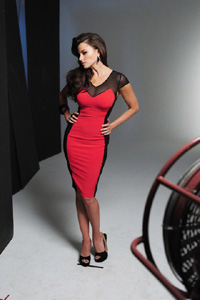 Sofia Vergara joins an amazing group of women, including Ellen DeGeneres, Taylor Swift, Queen Latifah and Drew Barrymore, that are all faces of CoverGirl.

“Hola! Can’t hold this secret any longer!” Vergara writes on Facebook. “I am the new @COVERGIRL and I am shooting my first ad today! I’m so honored to be part of this amazing group of women. There’s a cover girl in all of us.”

Vergara gives us a sneak peek of her first photo shoot, but her CoverGirl ads will not begin running until January 2012.

“I have loved playing with makeup ever since I was a little girl,” the 38-year-old actress said in a statement. “And now, I am so honored to join the lineup of extraordinary women that are and have been CoverGirls, and to be a part of a brand that is so committed to helping women look and feel beautiful.”

It seems to be the trend of many makeup giants to use actresses or singers instead of models to sell their products.

In fact, Cindy Crawford spoke about this to Parade magazine. “I do feel like an outsider now,” Crawford said. “But I just saw the CoverGirl commercial with Taylor Swift and I thought, ‘Wow, it is so hard for models to get a job these days.’ You have to sing and act, too. There doesn’t seem to be as much work specifically just for models.”

Tell us: What do you think of Sofia Vergara as the new face of CoverGirl?

29 mins ago
by Sara Kitnick