Rachel McAdams is suddenly on the top of everyone’s hot lists, thanks to her new film Midnight in Paris and her gorgeous look. What about those engagement rumors we keep hearing about? 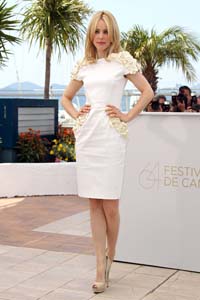 Actress Rachel McAdams is on the French Riviera at the 2011 Cannes Film Festival — and the 32-year-old Canadian stunner is turning heads and making headlines.

McAdams is at Cannes promoting her new Woody Allen film Midnight in Paris alongside Owen Wilson and Adrien Brody. Is that why she’s getting so much attention these days? Well, she did wear a gorgeous Maxime Simoens shift dress to the Midnight in Paris photo call, but that’s not the only reason people are staring.

No — many have their eyes fixed directly on the blond actress because of the rumors that she’s engaged to fellow Midnight in Paris actor Michael Sheen. We can confidently say that McAdams isn’t trying to hide an engagement ring or anything else. McAdams sat down with SheKnows last weekend and told us exclusively that she’s 100-percent not engaged.

That’s not all. McAdams is Elle magazine’s June 2011 cover girl and she dished on everything from film to love.

“I love that Woody likes good guys to be good guys and bad guys to be bad guys. Owen seemed to respond really well when I was a really bad guy,” McAdams said of her work on Midnight in Paris.

And what about love?

“You have those days when you wonder if you’re going to find it for yourself,” she said. “It’s such a hard thing to find. I think it was more that realization that rocked me.”

However, her parents’ lasting love shows that it does exist.

“I’m very blessed that way,” McAdams said. “I had a great example of love in front of me, and that’s probably what makes me such a romantic, because I’ve seen it firsthand.”

Look for our exclusive interview with Rachel McAdams coming on May 17!