Will Smith’s huge movie-set trailer is not winning him any fans in Manhattan, where he has parked his mobile mansion while filming Men in Black III. 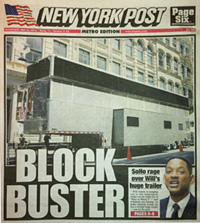 Will Smith’s movie trailer for Men in Black III is so large that it’s annoying residents of the Manhattan neighborhood.

“This thing is like a duplex,” a neighbor told the New York Post. “How would Will Smith feel if I parked that thing out in front of his house? People forget this is a residential neighborhood, not a film lot — that thing is taking up half our gasoline reserve.”

In fact, the cover of the New York Post has a picture of his massive trailer with the headlines: “Block Buster” and “Will Smith has found a trailer to match his massive ego.” Ouch!

The stats on this trailer are pretty impressive. It is a 1,150-square-foot double-decker, 30-ton box which includes “a lounge, a movie room with a 100-inch screen, marble floors throughout, offices for his assistants and writing staff, a large bedroom and all granite bathroom” as well as “a full-service kitchen with arched windows and matched-grain Italian cherry wood cabinetry.” The cost for this mobile mansion? A whopping $9,000 per week!

What has irked New Yorkers even more is that Smith has another 55-foot trailer with a full-size gym around the corner. In addition, he is renting a luxury apartment nearby for $25,000 per month!

It looks like Smith will be saying adios to his mobile mansion, as the mayor’s office has stepped in to ask him to move it! “To balance the interests of the production and the neighborhood, we have instructed Men in Black III to relocate the trailer to a private lot,” Julianne Cho from the Mayor’s Office of Film told CNN.

Smith is filming Men in Black III with Tommy Lee Jones, set to be released May 2012.