Angelina Jolie and Brad Pitt are attending the 64th Cannes Film Festival in the south of France. The mom of six chatted with reporters about her new tattoo and the possibility of more kids. 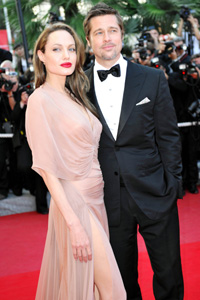 Angelina Jolie is attending the Cannes Film Festival to promote Kung Fu Panda 2, while her main man Brad Pitt will arrive on Monday to promote his new movie, The Tree of Life. They are expected to walk the red carpet together on Monday for his premiere.

Jolie chatted with Extra in Cannes about her buzzed-about new tattoo in which she added a line of longitude and latitude on her arm, beneath the six lines listing each child’s birthplace. Of course, adoption and pregnancy rumors quickly started, but Jolie cleared the air.

“Well, if they know that it’s latitude and longitude they would have figured out quickly that it was Brad’s birthplace,” she said. “It doesn’t take much investigation to figure that one out. It’s Shawnee, Oklahoma.”

Jolie went on to say that as far as more kids go, there is no possibility of adopting “at this time.”

Kung Fu Panda 2 touches on the subject of adoption, and Angelina said they talk openly about adoption in her house.

“We talk very openly in our house, so orphanage, birth parents, are happy words in our house, and it’s not a thing. I think they felt more connected to Po [the panda] and they identified with Po, who they think is very cool. It seemed very normal and they loved it.”