Charlie Sheen was shot down in an attempt to gain weekend visitations with his daughters by Denise Richards. 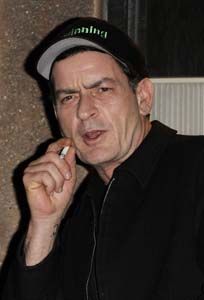 Charlie Sheen must be drinking a little too much tiger blood. The delusional actor wants weekend visitation with his daughters Sam and Lola, but ex-wife Denise Richards is not having it.

The former couple faced off in an LA lawyer’s office yesterday, where Denise convinced mediators that due to her deep concerns over the welfare of her kids while under Charlie’s supervision, things should stay exactly as they are — with Denise having sole physical actual custody of the girls.

Charlie gave up custody last year after he was accused of holding a knife to the throat of then-wife Brooke Mueller.

As of right now Charlie does not appear to be pushing the issue and won’t bring it to court.

Denise tweeted her weary relief after the two were spotted leaving the legal offices late yesterday.

“Looong day!!! very productive… hope everyone had a great day and night:)”

Sam and Lola remain safe from the warlock’s influence for now — unlike his twins with Brooke Mueller, Max and Bob, who are learning some interesting new vocab words while under their father’s care.