Sculpting the fluffy masterpiece known as Donald Trump’s hair is a slow process. For the first time the Celebrity Apprentice host is detailing exactly how his carefully sculpted coiffure comes to be each day. 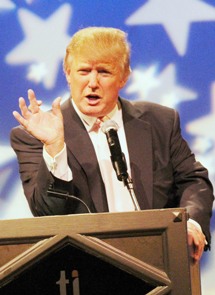 We can thank Rolling Stone for tasking their investigative journalism skills into the matter of Donald Trump’s hair. The magazine recently sat down with the man pestering President Obama to talk hair care.

So what’s the secret to Donald’s cotton candy puff of hair? It starts with an early morning rising and a shower. “OK, what I do is, wash it with Head and Shoulders,” explains Trump. “I don’t dry it, though. I let it dry by itself. It takes about an hour.”

Here’s where the patience comes in: “Then I read papers and things. This morning I read in the New York Post about Jerry Seinfeld backing out of his commitment to do a benefit for my son Eric’s charity. I’ve never been a big fan of Jerry Seinfeld — never dug him, in the true sense — but when I did The Marriage Ref, which was his show and a total disaster, I did him a big favor. Then he did this. It’s a disgrace.”

Donald Trump goes on, “I also watch TV. I love Fox, I like Morning Joe, I like that the Today show did a beautiful piece on me yesterday — I mean, relatively speaking.” 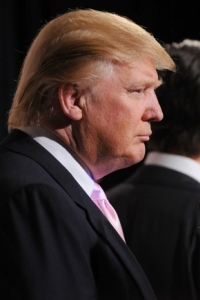 Step one: Shower, Head and Shoulders
Step two: Hang out belittling others and fluffing own ego
Step three: Back to the hair

“OK, so I’ve done all that. I then comb my hair. Yes, I do use a comb.” He pauses, frowning, casting his mind back to capture the details of the event. “Do I comb it forward? No, I don’t comb it forward.” He pushes the leading edge of the flying wing of his hair back, to show where the hairline is. “I actually don’t have a bad hairline. When you think about it, it’s not bad. I mean, I get a lot of credit for comb-overs. But it’s not really a comb-over. It’s sort of a little bit forward and back. I’ve combed it the same way for years. Same thing, every time.”

There you have it folks! One part shower, a huge scoop of ego and a forward/back brushing technique are all it takes to get Donald Trump’s hair in tip top shape. Remarkable.