Sarah Ferguson stopped by The Oprah Winfrey Show to dish her life — past, present and future. Well, it was actually more to promote her new upcoming show on OWN, Finding Sarah. 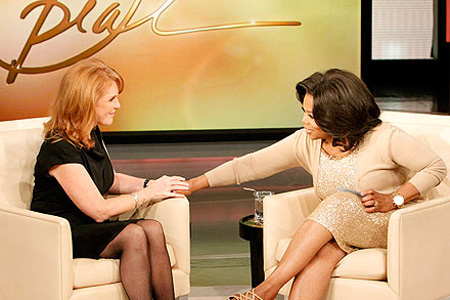 What did the gals chat about as the former Duchess of York appeared on one of Oprah Winfrey’s final episodes? The conversation quickly started with that pesky royal wedding snub. Ferguson said, “It was so difficult. I wanted to be there with my girls and to — and to be getting them dressed and to go as a family.”

Sarah Ferguson spent the day of the royal wedding in Thailand, saying, “I felt that I ostracized myself by my behavior, by the past, by living with all the regrets of my mistakes.” She added, “I sort of wore a hair shirt and beat myself up most of the day thinking and regretting — why did I make such a mistake?”

Ferguson and Oprah Winfrey also discussed Ferguson’s sessions with Dr. Phil in her documentary Finding Sarah. Dr. Phil touched on her guilt and what prompted her to make the mistakes she’s made. You’ll have to wait and see that monster session in the show.

Sarah Ferguson also said her family has been behind her. “We grow together and support each other,” she said.

How did her daughters, Princess Beatrice and Princess Eugenie, handle the bribe that brought shame to their mom’s name? Ferguson revealed her “confident daughters” simply said, “Okay, mom, this is a big one. But let’s look at it and get through it.”

She concluded her time with Oprah Winfrey by looking back at a picture of herself on her wedding day. Winfrey asked her what she would say to her former self. “Sarah, do you have any idea of who you are?” the former Duchess said.

Sarah Ferguson added, “I had it all and I blew it.”