Arnold Schwarzenegger has spoken publicly about his split from Maria Shriver for the first time and says the pair is still in contact. 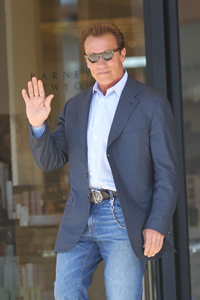 Arnold Schwarzenegger appeared at an Israeli Independence Day event in Los Angeles Tuesday night where he spoke about his split with Maria Shriver, his wife of 25 years, for the first time since going public with the announcement.

“We both love each other very much. We’re very fortunate that we have extraordinary children.”

Maria Shriver has already moved out of the couple’s Brentwood, California mansion. According to reports, a former Schwarzenegger aide says he first heard of the couple’s split as far back as January.

You can see video of Schwarzenegger’s comments here, courtesy of WCVBtv (who unfortunately disabled video embedding, the party poopers).