Ashley Hebert may be looking for love in all the wrong places on the new season of The Bachelorette. One of her suitors is being accused of involvement in the mysterious death of his wife. 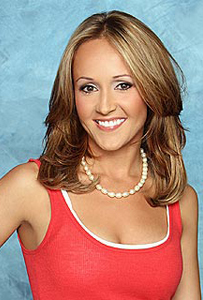 Ashley Hebert had better sleep with one eye open, say the former in-laws of one of her suitors on the new season of The Bachelorette. West Lee, a 30-year-old lawyer from South Carolina, has a mysterious death in his past: That of his wife, who was found dead in a bathtub shortly after arguing with him.

Although Lee was cleared of any wrongdoing by police, the dead woman’s parents remain convinced he was involved. His former mother-in-law Diane Sapp told Star magazine, “I believe that West was my daughter’s enabler, and I just feel he had something to do with Sarah’s death. I would tell Ashley to think long and hard before getting into a relationship with him.”

According to Star, the circumstances of the woman’s death are just plain suspicious — and Hebert’s potential love interest may have had something to do with it. West and Sarah Lee (yup, like the pies) were smoking pot and arguing about the three separate car accidents in which Sarah had been involved within a matter of days.

According to the police report, West said, “After several minutes the victim stood up and said to the complainant, ‘I’ve just had an epiphany.'”

She drew herself a bath, and when West hadn’t heard any noise for an hour he says he forced open the door and found Sarah submerged and dead.

Sarah’s parents remain convinced West had something to do with their daughter’s death.

“She was in a rehab facility right before she died but West took her out,” her father told Star. “The life they shared was a mess. Partying and drinking were not things Sarah was doing — until she started dating West.”

Tell us: Should Ashley Hebert give West Lee a chance?