The Voice‘s blind round teams of eight have been chosen and there’s no going back. As Blake Shelton, Christina Aguilera, Cee Lo Green and Adam Levine prepared for their first round of voice battles — it was anyone’s game.

The Voice’s Blake Shelton, Christina Aguilera, Cee Lo Green and Adam Levine had the difficult task of pairing two of their eight team members up in a voice battle to the death. The prize? The honor of continuing on in the live competition round. 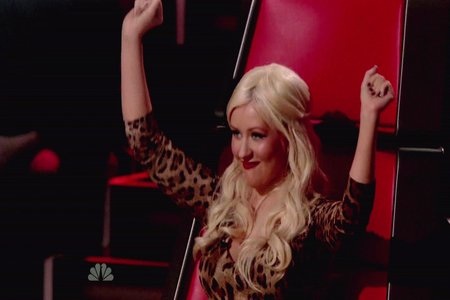 Here’s how it worked. Each coach picked two team members to go head-to-head with the same song — the mock boxing ring was just for show, no one got hurt. It was up to the judge and their special guest coach to pick which contestant would stay. At the end of the night, four contestants will have moved on, with the second, third and fourth part of the battle rounds continuing in the following weeks.

Christina Aguilera knew what she was doing when she pitted these two against each other. It was a total diva-off! We were scared it was going to get ugly in the ring, but they kept their composure and made it difficult for Aguilera to judge.

Blake Shelton put country crooner Patrick Thomas against soul-man Tyler Robinson. There couldn’t have been two such different vocal stylings put to the test with Elvis’ Burning Love. From the moment Patrick opened his mouth and that cowboy-cool voice came out, we knew Patrick was going to lock this. That still didn’t stop special guest Reba McEntire from helping Shelton mentor Tyler.

Unfortunately, during the battle round, Patrick’s sweet, Southern voice won over Blake Shelton and he moved on to the live round. The interesting part of this? Adam Levine and Cee Lo Green both agreed they would have picked Tyler.

Break out the boy-girl duet for Adam Levine. Levine tasked Casey Weston and Tim Mahoney to take on Leather and Lace. How did Casey Weston, the new girl who’s only been singing a short while, do against the seasoned performer Tim Mahoney?

Adam Levine wasn’t sure how it would go. He had reservations about Mahoney’s register on the song. Despite his last minute effort to pull it out, Levine still went with the raw talent of Casey Weston who reminded Cee Lo Green of a young Stevie Nicks. Just a side note — those two blended so well it was actually a shame they couldn’t have just serenaded us all night.

Cee Lo Green’s battle was by far the best battle of the night! Vicci Martinez and Niki Dawson took on Pink’s Perfect and sealed their fate as future superstars!

It was diva against soul. Niki and Vicci left it all on the floor and received standing ovations from Blake Shelton and Adam Levine.

Cee Lo Green could barely hide the emotion from behind his big sunglasses as he was physically moved by Vicci. Niki, on the other hand, is like a sister to Green — he feels that strongly about the connection. He had to go with the emotion that was fueling him. Vicci Martinez was sent to the live competition round.

What do you think of the first battle rounds on The Voice? Were the best put through?