Now that Glee‘s much anticipated prom episode has come and gone, all focus is on the upcoming Glee death. That’s right, one of our beloved songbirds will sing their last sweet note before this season comes to a close. 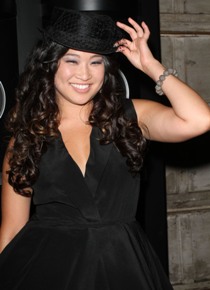 Rumors of a Glee death swirled for weeks before being acknowledged by members of the cast. Jenna Ushkowitz, who plays Tina on the show, admits that the Glee death scene was a struggle for her and her castmates to film, but gives no clues as to which character will be passing away.

“You know it was really, really sad,” Jenna tells Hollywoodlife. “Any kind of death is sad and it brings you back to a place you don’t really want to go. So it kind of affects everybody. It was really hard but the episode is done really, really well.”

The 25-year-old hopes fans will “appreciate” the storyline and predicts we will like watching the “sad” Glee death scenes. If balling our eyes out is a sign of “like,” then Jenna is probably right!

“It was really sweet and I think people will appreciate it,” she continues. “It was done in the right way. I think they’ll be sad but I think they’ll feel for the characters who will be affected by it. Any death, and especially on Glee since you don’t expect something like that, so for that to happen, I think you’re like ‘Oh, wow.’ I think fans will be shocked a little bit, and not expect anything at all. I think fans will like it.”

Matthew Morrison was also tight-lipped about the upcoming Glee death. “Somebody’s dying,” the man known as Mr. Schue said. “Obviously I’m not going to tell you who it is, but it’s no one that you would probably expect. The episode right before the finale is called Funeral. We were actually at a funeral home yesterday, shooting all day. It was a very taxing day.”

All we know is if it ends up being one of the regular cast members, fans are going to gleek out!

Any guesses on which character will be the victim of the Glee death?

Glee extra ruins prom surprise for everyone on Twitter
Watch Glee’s Lea Michele’s many facial expressions in 3D
Glee’s Matthew Morrison gleeks out to own song on season finale!