Despite being a performer for most of her life, Selena Gomez says she still gets nervous sometimes — most notably on the red carpet. 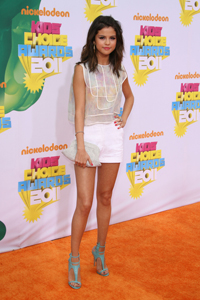 Walking the red carpet in a stunning couture gown, millions of dollars in borrowed jewels and spectacular hair and makeup sounds like a dream from which we don’t want to wake — but for Disney star Selena Gomez it is more like a nightmare.

“I can still walk down the street, so in that respect I’m quite lucky,” Gomez said. “But some things in my life don’t come naturally, like walking the red carpet.”

“It’s pretty scary! It’s not that I’m not confident in myself, it’s just that the red carpet is not somewhere I feel totally comfortable.”

It could have something to do with a gazillion cameras flashing in your face and knowing that within hours those photos will be plastered all over every celebrity gossip site on the web, ahem. One unflattering pose and a star is fat joke fodder for weeks.

Lucky for Selena Gomez, who performed live recently on Dancing With the Stars, she has looked pretty slammin’ in every red carpet photo we’ve ever seen of her.

read on for more selena gomez