The semifinalists of Dancing With the Stars have been revealed, but before that could happen one more dancer had to go home. Was anyone surprised Ralph Macchio made the cut and Romeo went home? 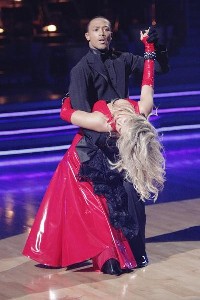 It’s down to the final four dancers on Dancing With the Stars as the race for the mirror ball trophy heats up. Here’s how your votes shaped the semifinals of America’s most watched reality show.

Right off the bat we knew Hines Ward and Kirstie Alley were safe to dance another day. Not because it was intuition, but because Brooke Burke and Tom Bergeron told us at the top of the show.

This is Dancing With the Stars, so we were treated to two fantastic performances while the rest of the couples sweated it out. First, Michael Bolton, whose SNL parody has been lighting up the Internet, performed a fantastic tune called I’m Not Ready. Then it was mega-superstar Adele’s turn. She was sick and still managed vocal perfection with her hit Rolling in the Deep.

It was back to business as Chelsea Kane was sent to safety, leaving Romeo and Ralph Macchio up for elimination. Ralph Macchio danced through an injury and Romeo didn’t wow us, so it was anyone’s game. We were shocked to see Romeo and Chelsie Hightower leave considering Ralph Macchio got brutally low scores from the judges.

What do you think of Dancing With the Stars’ final four — Kirstie Alley, Ralph Macchio, Chelsea Kane and Hines Ward?