Glee got gussied up for the all-new episode Prom Queen! But did anyone expect Kurt and Karofsky to be prom king and queen? Read on to see how the big night went down!

Glee’sbig prom episode, Prom Queen, gave us quite a twist with the crowning of Karofsky and Kurt (Chris Colfer) as the school’s prom king and queen. With Glee, you just never know what’s going to happen, so let’s see how it all went down — starting with the couples. 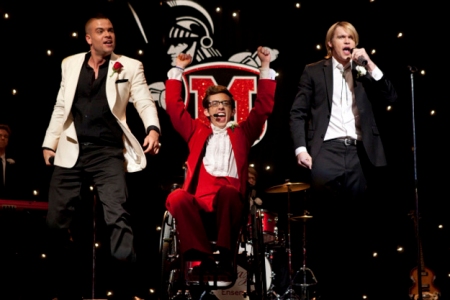 With the cancellation of Air Supply leaving McKinley High’s prom in a lurch, the kids of New Directions agreed to be the big night’s entertainment! With the entertainment lined up and the couples on deck, Glee’s prom night was a go!

Another couple that turned out to be super-cool were the brave souls of Kurt (Chris Colfer) and Blaine. Have no fear, prom couple Santana and Karofsky formed the Bullywhips, and made sure no one gave the couple a hard time — until the end. Karofsky even apologized to Kurt in an emotional scene fit for Glee.

In other couple’s news, Artie tried to get Brittany back by serenading her with Isn’t She Lovely. Oddly enough, she didn’t buy it and decided to go by herself.

That left the obvious couples of Quinn (Dianna Agron) and Finn (Cory Monteith) and Puck and Lauren. They were tame compared to the drama that surrounded the rest of the couples.

How did Glee kick the prom off? With the most awesome rendition of Rebecca Black’s Friday ever, that’s how! Everyone was getting down with Puck, Sam and Artie’s rendition of the infamous YouTube sensation! 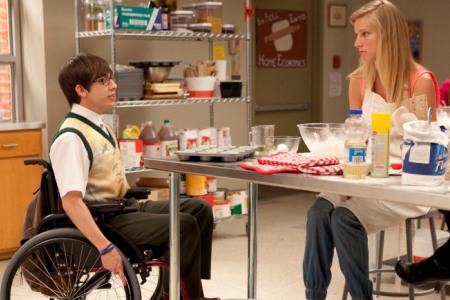 Prom was basically one big performance, but some interesting turns happened that were a bit underwhelming and surprising at the same time.

Karofsky as king was fine, but Kurt believed he was nominated as prom queen as a way to humiliate him. The Bullywhips may have made the halls safe but bullying reared its head in another way.

The second issue was Quinn not being chosen and how the slap came into play. Basically, she blamed Rachel for her not winning and flipped out. The slap was very anti-climatic having seen it in the previews and the reasoning behind it was not something we wouldn’t expect. She blames Rachel for everything and for keeping Finn’s interest.

Santana has a lot of internal angst going on and her connection to Brittany continues to be great to watch. She wanted to win so badly and really believes people can tell she’s a lesbian. Her solution? Move to a lesbian colony in New York.

They wrapped everyone’s inner struggles up in a nice bow by having Kurt proudly accept his crown, saying, “Eat your heart out, Kate Middleton.” The group danced to Dancing Queen to sum it all up!

What did you think of Glee’s episode Prom Queen? Did it play out how you thought it would?