The competition for Chief Resident has been hot all season on Grey’s Anatomy, but the race hits a new level tonight, May 12. With residents on overdrive and a McBaby adoption underway, Meredith is about ready to crack in an episode aptly titled I Will Survive. 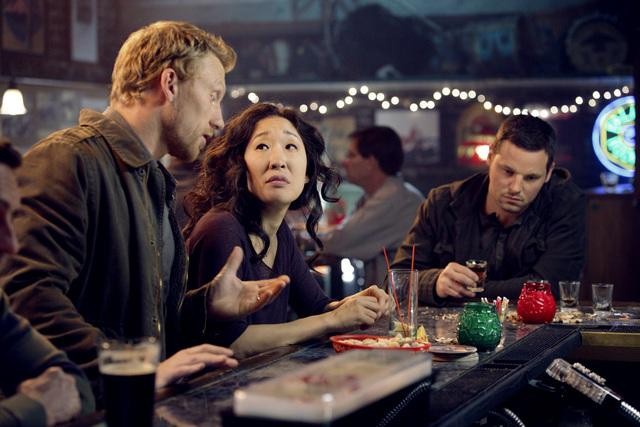 Cristina is a front-runner again, but the cocky doc may be digging her own grave with her escalating defiance. When she finds a tree in a patient’s lung, she begs April to stand in on the surgery instead of telling their superiors about it. She even promises to put a good word in for April with Owen, but if she keeps this up, what will her word be worth?

With Cristina threatening what he thought was a sure thing and an offer to run the Nambosi Clinic on the table, Alex is considering his options. If he can’t land the Chief Resident position, he doesn’t see much keeping him in Seattle. Needless to say, that sentiment doesn’t go over well with Lucy, who thought their budding romance just might be something!

Teddy, meanwhile, finds herself juggling two of Seattle Grace’s hottest guest stars, Scott Foley and James Tupper. Henry (Foley) managed to scare Teddy away from one of her recent dates, but with Doc Perkins (Tupper) back in town, he may just be outmatched. Perkins, who seems to have the full story on Teddy’s new hubby of convenience, is offering Teddy a happily ever after in Germany. Henry’s such the underdog in the race for her heart that the Chief can’t help but let him into his diabetes clinical trial.

Life at Seattle Grace was never all business, but these days, there’s a lot of family action mixed in with the hookups, breakups and breakdowns. 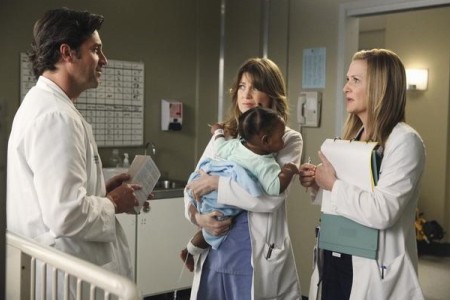 Speaking of breakdowns, adoptive hopeful Meredith is just about ready for one of those! She and Derek have met their McBaby, but now Meredith has to pass the adoption test and their McBaby must overcome serious health issues. Tack on the race for Chief Resident and it’s hard to know which issue to worry about first!

Meanwhile, new daddy Sloan has baby Sophia for the day, allowing Callie to jump back into her first day at work. Plagued by a bit of separation anxiety, Callie begs Owen for some good bone-cracking surgeries so she doesn’t go running back to her mommy duties.

The drama kicks off Thursday, May 12 at 9 p.m. on ABC, followed by a new episode of Private Practice.