Heidi Montag clues George Lopez in on what she’s been doing over the past few months. 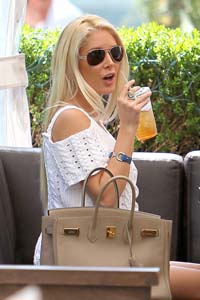 Heidi Montag appeared on George Lopez Tonight to dish about where she’s been for the past six months. You know, because everyone cares.

“I needed a break after such a crazy six years of my life,” Montag told Lopez. “And [from] being in L.A. and Hollywood… I’ve been with my puppies and my husband. It’s low-key.”

Why did she decide to take a break? Because being in the public eye is exhausting, even for people who seek out fame at every opportunity.

“It’s hard,” she said. “[But] it’s fun. I would never discourage anyone from following their dreams and their passion, and obtaining any kind of success is great.”

Don’t be too sad, though! Montag is back to wreak havoc on our televisions again on VH1’s new show Famous Food. Real Housewives of New Jersey villain Danielle Staub and former Bachelor Jake Pavelka are co-starring on the show.

“We started a restaurant from scratch. There’s seven celebrities… We have to find wallpaper and decorate it, and [find] a menu — and I found the chef!” Montag said about her role on the show.

“We are all potential owners or whatever. And at the end, maybe one person might get chosen to be a partner in the restaurant, and then maybe no one will get chosen.”

We’re all for it — just as long as we don’t have to see Spencer Pratt’s creepy flesh-colored beard and magical healing crystals. Then again, maybe it’ll tank just like Audrina Patridge’s new reality show?

We can’t wait to find out.

Do you want to see Heidi Montag on television again?