Pippa Middleton probably did not think she would be the sister of royalty when she took the topless photos that are reportedly being “shopped” around. The younger sister of Kate Middleton and her family feel “betrayed” and are trying to stop the leaks. 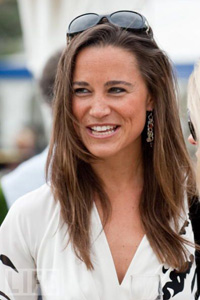 Kate who? Kate Middleton’s younger sister, Pippa Middleton, has been the talk of the town since she wowed millions of viewers in her beautiful cream Sarah Burton bridesmaid’s gown during the royal wedding.

Now, much to the dismay of the Middleton family, topless photos of Pippa are reportedly being shopped around.

“The whole family is furious at what they see as a betrayal,” a friend tells the Telegraph newspaper.

Pippa is not the only Middleton with embarrassing photos. James Middleton, Kate and Pippa’s brother, had photos of him leaked in which he is naked, with his legs crossed.

“James and Pippa are really embarrassed,” a source says. “How were they supposed to know when these pictures were taken that they would be put under such scrutiny?”