Neil Patrick Harris has been tapped to host the 65th annual Tony Awards! The actor is “stoked” to be hosting the ceremony for the second time. 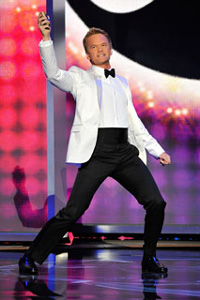 Broadway actor and How I Met Your Mother star Neil Patrick Harris has a date with Tony — the Tony Awards, that is.

Harris last hosted the Tony Awards in 2009 — and even won a Creative Arts Emmy Award in the category of Outstanding Special Class Program! Will & Grace actor Sean Hayes hosted in 2010.

“I’m honored and stoked to have been asked to host,” said Harris, who is a father to twins with partner David Burtka. “It should be a great show — we’ve got a fantastic mix of live performances, a few secret surprises, and since they’re closed for retooling, we’re using all the rigging equipment from Spider-Man. What could possibly go wrong?”

The Spider-Man: Turn Off the Dark musical has been plagued with multiple injuries and has been postponed several times while they are working out the kinks.

“We’re thrilled to have Neil back as our host,” said executive producers Ricky Kirchner and Glenn Weiss. “And we’re even happier he fits in the Spider-Man rigging.”