Al Pacino has been cast as a mobster… again. The actor just signed on to play mobster Neil Dellacroce in the new Gotti: Three Generations movie. 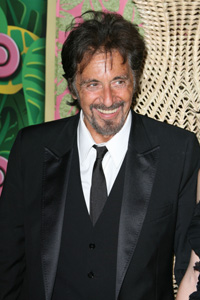 We know Al Pacino can play a mobster very well — after all, he has made a career out of it! He played Michael Corleone in The Godfather, Tony Montana in Scarface, Big Boy in Dick Tracy and Carlito Brigante in Carlito’s Way.

To add to his mobster resume, the 71-year-old has signed on to play Neil Dellacroce in Gotti: Three Generations. John Travolta has been cast as John Gotti and Travolta’s wife, Kelly Preston, will play his on-screen wife. Their daughter Ella Bleu is also cast in the movie as their on-screen daughter, Angel Gotti. Lindsay Lohan is set to play Kim Gotti, the wife of John Gotti Jr.

Academy Award winner Barry Levinson will direct the film that shares the inside story of the Gotti family.

“Al Pacino is one of the finest actors of all time, and will bring an unsurpassed level of reality and excitement to the film,” said Marc Fiore, CEO of Ciore films. “We are very pleased to have Al join the extraordinary team that we are assembling to make this movie.”