Patrick Schwarzenegger may be dealing with his parents’ separation, but the son of Maria Shriver and Arnold Schwarzenegger is keeping his outlook optimistic thanks to his Hummer! 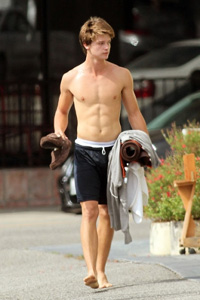 The hunky son of Maria Shriver and Arnold Schwarzenegger doesn’t seem as surprised as the rest of us that his parents are separating after 25 years of marriage.

Patrick Schwarzenegger (or Patrick Shriver, as he goes by on Twitter) spoke out on Twitter about the end of his parents’ marriage:

“Appreciate all your messages. Small speed bump in life, luckily we own hummers, we will cruise right over it. All will be okay. #peace.”

Nothing like a gas guzzling SUV to make you feel better!

The 17-year-old model and entrepreneur has three other siblings, including Katherine, 21, Christine, 19, and Christopher, 13.

Patrick recently told Details that he counts Tallulah Willis (daughter of Bruce Willis and Demi Moore) as his friend — and he actually seems to have a good head on his shoulders. “My mom raised me with the idea of doing public service, and I definitely want to go in that direction. But I also want to follow in my dad’s entrepreneurial footsteps,” he said. In fact, he started his own clothing line called Project 360!

I’m sure Patrick has his pick of young ladies — but he told Details that one in particular has caught his eye.