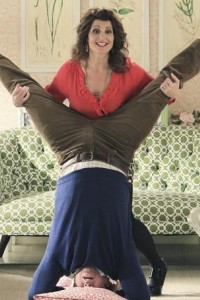 The laughs start at 8 p.m. on The Middle: Prom. Thanks to a text misfire, Axl invites the wrong coed to prom. He’d rather miss the big event than deal with clearing things up with Ashley, but Frankie (Patricia Heaton) is intent on keeping her son from being “that” jerk. She orders him to either give Ashley some face time and respectfully back out or take her to prom. Meanwhile, socially awkward Sue decides to infiltrate the B-crowd at school and Brick gets the acting bug. Frankie and Mike are thrilled to see their son making progress, but soon tire of Brick’s endless parade of one-man plays.

At 8:30, it’s a shotgun wedding and a new baby on the season finale of Better with You. When Mia and Casey hit the hospital for their big arrival in Better with the Baby, Mia reconsiders her decision to put off their wedding and the entire clan is sent hustling to pull together a last minute hospital wedding. While Mia fights to keep baby Charlie inside her for a little while longer, Casey and Ben take on City Hall in search of a marriage license, Maddie tracks down someone to perform the ceremony and Vicky and Joel hit the gift shop in search of “something old, something new, something borrowed, something blue.”

Then it’s Cougar Town: Damaged By Love, with special guest Nia Vardalos. Jules (Courteney Cox) and Bobby try to support broken-hearted Travis, but don’t have a clue how to help him get over Kirstin, who shot down his marriage proposal. Grayson makes the mistake of talking back to Jules. My Big Fat Greek Wedding‘s Vardalos plays sister-in-law to real life hubby Ian Gomez (Andy) and her flirty ways send Ellie over the edge. Ellie’s so upset over Andy’s in-law that she turns to Laurie for support! 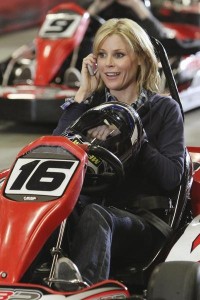 Then Fred Savage (The Wonder Years) is behind the camera as director for Modern Family: Good Cop Bad Dog. When Claire and Phil decide to switch roles for the day, laid-back Claire and disciplinarian Phil may just prove to be a bigger shock than the kids can handle — literally! After Gloria takes in yet another stray, Jay shares his dog training business scheme with an overzealous entrepreneur (Lin-Manuel Miranda), while Cam battles the flu, leaving Mitch to decide what to do with their Lady Gaga tickets. Will Little Monster Mitchell leave Cam home alone with Lily?

Then it’s time for the 10 p.m. double block of Happy Endings. Alex leaving Dave at the altar may be old news by now, but in The Girl with the David Tattoo, the exes still have to deal with their his-and-hers tattoos. Meanwhile, it’s Jane’s turn to meddle in Max’s love life this week and she puts her support behind “perfect” Adrian (O.T. Fagbenle), while Brad loses his cool over the world’s worst waiter (B.J. Bales).

After that, Max finally lands a new cutie (Max Greenfield) in You’ve Got Male, but when he stands up against a big coffee chain, his protest may throw cold water on the budding romance before it can percolate. Meanwhile, one of the gang’s favorite high school teachers, Alan (Rob Huebel), shows up and Dave, in particular, is thrilled to reconnect with him. When Penny sees another side of Alan after he takes her on a date, she must decide what to do with the intel.