Paul McCartney does not want his new fiance Nancy Shevell to sign a prenup, pals say. 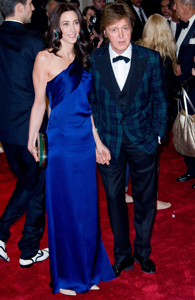 Paul McCartney has lost his mind. After being taken to the cleaners by ex-wife Heather Mills, the filthy rich musician says he will not make his fiance Nancy Shevell sign a prenup.

A friend told E! News, “His friends and business advisers think he’s crazy after what happened with his ex, but Paul is insisting Nancy is no Heather.”

“There’s no need to make marriage a business arrangement.”

Not that his new fiance Nancy would need the cash if the couple split — she already has quite the fortune in her own right. Her father is a trucking magnate and she herself is a highly successful businesswoman.

“She is the opposite of Heather and hates the public spotlight, plus she doesn’t need his money to live a great life,” the family insider said.

Mills collected a whopping $48.6 million divorce settlement when the couple split, still a fraction of the $250 million she requested.

Throwing caution to the wind, Sir Paul wants nothing more than for Shevell to simply sign a single page stating she will not go after his kids’ trust funds.