Jesse James is still talking. The serial cheater says he knows his affairs were a mistake but was convinced Sandra Bullock didn’t really love him anyway. 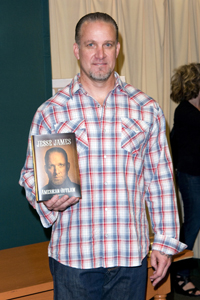 Jesse James will not stop talking about what a jerk he is, and in his attempts to publicize his new book, American Outlaw, he is doing little more than alienating himself from the public even more. Today’s example: Jesse says while he now realizes cheating on Sandra Bullock was a mistake, he figured it was okay because he didn’t believe she actually loved him.

“There wasn’t any kind of ulterior motive,” he told PopEater. “It was just a mistake. I was kind of caught in my own [expletive]. I never thought about the repercussions, there was some fear there but I didn’t have my head on straight.”

Profiting off the pain of a woman you vowed to cherish should be considered the exact opposite of success.

At least he knows how much we hate him. “At this point I don’t think I’m going to be able to do anything right in anybody’s eyes ever again, except kill myself or disappear,” he said, “then people will be happy I guess.”