Kirstie Alley is understandably proud of her Dancing With the Stars-induced weight loss, but it seems the 60-year-old actress has been eating a dangerously low amount of calories. After collapsing during rehearsals, Kirstie’s dancing partner, Maksim Chmerkovskiy, has ordered her to start eating more! 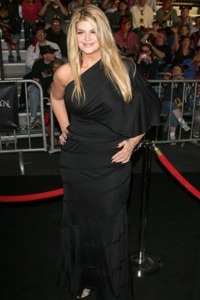 For many, a 1,400-calorie per day diet may not be considered extreme, but for current Dancing With the Stars contestant Kirstie Alley it isn’t enough. After collapsing once and falling down three stairs during rehearsals, Kirstie has been warned that she may be taking her dieting too far.

Maksim Chmerkovskiy, Kirstie Alley’s professional dance partner, has warned the Cheers star that her 1,400-calorie diet isn’t enough while she’s training so hard. “He said I need to be on 2,000 calories a day, he’s probably right,” Kirstie said. “I am listening.”

Kirstie, pictured here on May 7, admits that her falls are likely attributed to the fact that she had “forgotten to eat.” She explains, “I ate breakfast and then suddenly it was 5:30 in the afternoon. Time just went like that.”

Kirstie Alley has already dropped a considerable amount of weight on the show, sharing recently that she is now wearing a size 6. When asked about her current weight (previously she claimed to have lost 60 pounds), Kirstie said, “I have no idea, I’ve been measuring it by clothes. Now I’m down to a stretchy 4-6 size.”

Fitting into a special Alexander McQueen outfit that is a “legit size 4” is Kirstie Alley’s ultimate weight loss goal. “When I’m in that for real looking hot, I’ll be like that’s good. You’re done.”