Dancing With the Stars got spontaneous this week with the addition of the instant dance! Did Ralph Macchio make it to the floor despite a recent medical scare? Read on to find out.

There were two rounds to this week’s Dancing With the Stars — the individual dance and the instant dance. Here’s how it worked: The first round was dedicated to the individual dance. Right after they performed, the dancers picked a song and quickly rehearsed for round two! Remember, they had no idea what song they’d be picking! 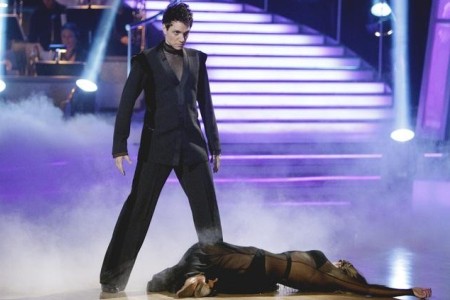 Chelsea Kane and Hines Ward once again went head-to-head for leader board bragging rights. Which one came out on top? It was the Disney darling!

Chelsea Kane and Mark Ballas set out to prove the young Disney star is worthy of the mirror ball trophy with a gorgeous waltz full of story and style. Len Goodman said, “It was a little theatrical for my taste,” but praised her all the same. The duo managed the first double 10s of the season. Their instant salsa to Sean Paul’s Get Busy was, how do we put this? H-O-T. Chelsea Kane’s hips were made for shaking! The judges were split, but who cares? It’s America that gets the final say! They managed a total score of 55 for both rounds!

Hines Ward and Kym Johnson tangled with the foxtrot for their first dance. His smile and the fake ring he used as a prop were so bright we could barely focus on their feet! That was fine, because as Bruno Tonioli said, “Yes, yes, yes!” He truly was spectacular! Their quickly choreographed instant jive to Chantilly Lace was fast and fun — exactly what we expect from the Pittsburgh Steelers star! Bruno called him, “Mr. Happy Feet!” We love his comparisons! They received 54 points, putting them just behind Chelsea Kane and Mark Ballas. 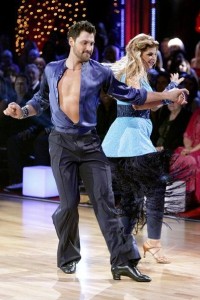 Kirstie Alley and Maks Chmerkovskiy took on the technically difficult Argentine tango. There were lifts and twirls galore, and the best part? She kept both of her shoes on! Alley can really dance when she puts her mind to it. Bruno Tonioli said she was “brilliant” and a “seductress.” She received a pretty nice gift too — her first 10 of the season. Her instant salsa to Cobrastyle was an instant hit with the judges, but it was just okay for us. It felt like she was just going out there and mixing it up on the dance floor instead of raising the bar. With that said, she should be put through because she’s a pure joy to watch! She managed a 53 for the night.

Romeo and Chelsie Hightower might be young but their grown-up tango was anything but! Did anyone else enjoy Romeo’s manly machismo as he whipped Chelsie around the floor? Their instant salsa to Tequila made us want to go out to the club and have some fun, but it was too simple to compete with the greatness that Chelsea Kane and Hines Ward produced. Their score of 52 put them neck and neck with Kirstie Alley and Maks Chmerkovskiy despite a successful first round.

Ralph Macchio’s recent medical scare hindered his and Karina Smirnoff’s performance, but it was a valiant effort. Their Viennese waltz wasn’t half bad despite a ruptured cyst. It was a bit stationary, admirable for only nine hours of rehearsal time. Their instant cha cha cha to Stuck in the Middle was completely centered around his limited use of his leg. His score of 46 put him right at the bottom of the leader board.

Did anyone else notice a pattern with the leader board this week? The numbers went: 55, 54, 53, 52 and a drop-off at 46. Isn’t it interesting that only a point separated first through fourth place as Dancing With the Stars goes into the final four? Who do you think is going home this week — Kirstie Alley, Hines Ward, Ralph Macchio, Romeo or Chelsea Kane?