Benjamin Millepied should be super happy right now: He’s about to be a dad and is engaged to the hottest actress in the world, Natalie Portman. Apparently, that’s not enough to make him happy. 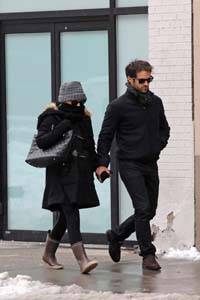 Natalie Portman is on top of the world right now with her pregnancy, Oscar win and box-office success with Thor. However, we can’t really say the same about her fiancé, ballet dancer Benjamin Millepied.

The France-born ballet dancer, 33, got more than a little P.O.’ed when a New York Times reporter asked him about his baby mama’s health. He was at the New York University’s Kimmel Center to receive a “Medal of Honor” from NYU’s La Maison Francaise when NYT reporter Sarah Maslin Nir jokingly asked him about what military thing he did to deserve the medal of honor.

The joke was lost on Millepied, because he shot back with a snarky response.

“You’re being funny?” he asked Nir. Then, she apparently asked the biggest no-no question of all.

With that, “Millepied stormed off, oozing exquisite hauteur. The kind, we suspect, that can emanate only from a ballet divo engaged to a megastar,” Nir wrote.

“We were told by the organizers that our inquiring after Ms. Portman’s health was ‘inappropriate’ and that Mr. Millepied wanted us out,” she continued. The only way they could stay was if she stopped reporting the events.

Good for her! Honestly, would anyone care about Millepied if he wasn’t with Portman? Nope! Don’t get too big for your britches there, Benjamin!