Tina Fey dusted off her Sarah Palin impression for last weekend’s Saturday Night Live. Michael Bolton’s wacky Digital Short and Maya Rudolph’s birthing class may have been among the biggest surprises of the night, but Fey always delivers the laughs as Palin.

Julianne Moore recently made news for striking a startling resemblance to Sarah Palin, who she’s playing in HBO’s upcoming docu-drama Game Change, but this weekend, Americans got a taste of our favorite Palin, Tina Fey! 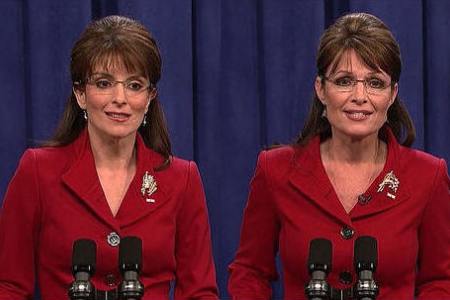 Saturday Night Live head writer turned 30 Rock superstar Fey knew just what the audience was waiting for when she took the stage for her SNL monologue on May 7, so naturally, the funnywoman pulled a bait and switch! She referenced her “famous impression,” but then threw out a Sling Blade one-liner.

Everyone was, of course, panting for the impression of former Alaskan governor Sarah Palin that turned Fey into a household name back in 2008 and, of course, Fey did deliver during SNL‘s Fox News 2012 Republican Presidential Undeclared Candidates Debate sketch. Fey’s Palin shared the stage with Donald Trump (Darell Hammond), Michele Bachmann (Kristen Wiig), Mitt Romney (Jason Sudeikis) and Newt Gingrich (Bobby Moynihan), with Bill Hader’s Shepard Smith leading the debate. Each of the GOP players had his or her moment to shine, but Fey’s Palin stole the show with her dimwitted comments.

“It’s so great to be back on Fox News, a network that both pays me and shows me the questions ahead of time,” Fey’s Sarah Palin started. “I just hope that tonight the lamestream media won’t twist my words by repeating them verbatim.”

Later, the 2008 vice presidential hopeful missed the boat by saying she’s glad we rid the world of evil… and then revealed she was talking about Katie Couric, not Osama Bin Laden. Ouch! Fey’s Palin also dished her new part in Hangover 3, learning English and her commitment to the eternal campaign trail.

Check out Fey’s Sarah Palin in the clip below.