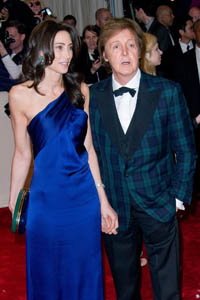 Rock star Paul McCartney proposed to girlfriend Nancy Shevell, and now she’s flaunting the massive diamond ring that McCartney presented her with when he proposed two weekends ago. The 51-year-old businesswoman was spotted rocking the rock last Friday while out shopping in New York City with her cousin, Barbara Walters.

What does $650,000 buy you in an engagement ring? Shevell’s sparkler has a very large round-cut diamond at its center in what appears to be a platinum setting. The couple has been dating for four years and plans to tie the knot in the Hamptons.

So, what else do we know about Shevell?

1. McCartney’s last marriage, to Heather Mills, ended disastrously, and the former Beatle’s children weren’t fans of his second wife. But his children adore Shevell. According to a fashion insider, McCartney’s fashion designer daughter, Stella McCartney, is “thrilled for her father” this time around.

4. She’s gone vegetarian for her 68-year-old husband-to-be. “Nancy has… given up her beloved steaks, which shocked us,” says a source. “When they traveled around America this summer, they lived on avocado sandwiches and tomato soup. Now Nancy orders veggie food all the time.”

5. Shevell’s been married once before. She married her college sweetheart, Bruce Blakeman. They divorced in 2008.