First there was American Idol. Now there’s America’s Got Talent, The Voice and The X Factor. Are we getting singer’s fatigue yet?

Simon Cowell just announced that Paula Abdul will join him, Cheryl Cole and L.A. Reid at the judges’ table during this summer’s debut of The X Factor. The show — already popular in the U.K. — is currently auditioning for contestants. 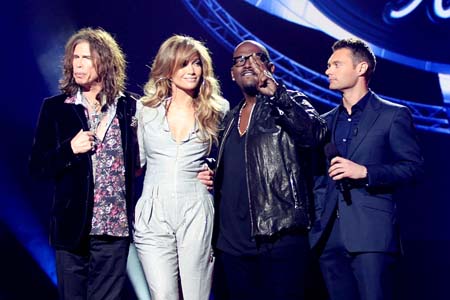 The big question: Does anyone really care? Anyone… Bueller?

This summer’s television line-up is already saturated with reality competition shows: American Idol, The Voice and America’s Got Talent, just to name a few. Really, how many competitions do we need?

Also, is there anyone left to audition for the shows? After all, it seems like people inclined to audition for reality shows probably would have done so by now. Otherwise, we’ll start seeing more American Idol rejects on the shows — oh wait, that already happened with former Idol finalist Frenchie Davis on The Voice.

However, if there is one show we want to succeed, it’s The Voice. Why? Because it’s deviating from the normal judges’ table concept. How do we know? Well, it’s our opinion — but ratings for the show have been majorly through the roof so far.

“What I love about this show is that it’s all based on positivity. We’re not trying to tear anybody down for a TV moment,” Christina Aguilera said of the show. “This is all about bringing up amazing talent because each and every person that gets up on that stage can sing and has a voice.”

Well, at least there are enough shows to go around for everyone.

Weigh in: Can The X Factor be successful with all the competition? What show is your fave?