Lindsay Lohan faces the music in her necklace theft case tomorrow. Is she finally heading to jail? 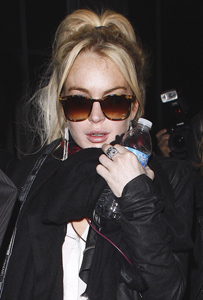 Lindsay Lohan plans to plead no contest for violating the terms of her probation tomorrow — but will she cash in another Get Out of Jail Free card?

In cases such as this, the judge usually allows the defendant to serve her sentence under house arrest while wearing an electronic monitoring bracelet. Since Judge Stephanie Sautner already made it clear she will treat Lindsay like any other alleged criminal in her courtroom, it is almost certain that the actress will serve her time from the comfort of her Venice Beach condo.

In fact, Lohan probably won’t even show up to court. Her lawyer Shawn Holley is expected to enter the plea on her behalf. As for how long she’ll have to wear that bracelet, brace yourselves. It could be as little as 14 days.

Keep in mind that this is not a plea for the actual theft case itself, but only for violating her parole by being charged with the crime in the first place. Lohan could still be sent to the pokey for the great necklace caper.

Check out SheKnows tomorrow for the results of Lindsay Lohan’s plea deal!