Glee‘s highly anticipated episode Prom Queen has all the necessary components to make it the most talked about of the season — the return of Jesse St. James, Rebecca Black’s Friday and the crowning of the prom king and queen.

We’ve been waiting for Glee’s new episode Prom Queen since we saw the promo with the slap heard around the world — and now it’s here! So, what’s going down at McKinley High’s prom? We’d all like to know! 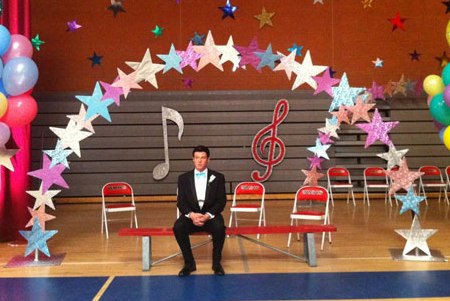 Here’s what we do know about the all-new episode so far. When the McKinley High prom entertainment suddenly comes up short, Principal Figgins calls on the kids of the New Directions to take over as the entertainment. That’s just the beginning. Sue Sylvester is the prom’s coordinator, so you know that can’t be good.

Prom Queen also features the return of Jesse St. James and the remake of YouTube sensation Rebecca Black’s Friday! Friday, Friday, everyone’s getting down on Prom Queen — too much? You know you’ve made an impact if Glee is covering you.

As for the slap, we know it’s bound to get messy with Quinn’s (Dianna Agron) paranoia of Rachel (Lea Michele). You’ll have to wait and see the outcome just like the rest of us.

Check out the preview of Prom Queen and tell us who you think will win prom king and queen. Do you think Quinn’s bathroom brawl preview is an indication that the reigning queen bee of the school will be taken down?