Heidi Klum and Seal must love weddings (and have money burning a hole in their designer pockets) because the couple renewed their vows for the sixth time on Sunday. Get all the details — including Heidi’s accidental flashing — here!

Heidi Klum and Seal renewed their wedding vows for the sixth time on Sunday at Donald Trump’s Mar-a-Lago Club in Palm Beach, Florida. They were planning on having the celebration at their beachfront home in Mexico, but due to the increase in drug-related violence, they decided to take the party to Trump’s place. 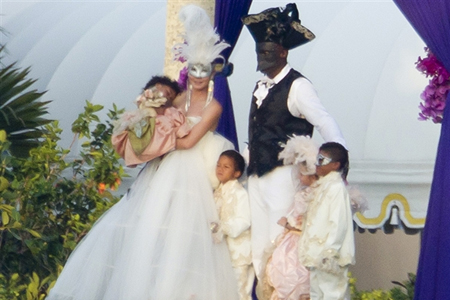 Going with a Mardi Gras theme this year, the couple had fun with their costumes, with Seal wearing a Pirates of the Caribbean-inspired hat and Heidi donning an elaborate feathered mask.

Klum wore a white strapless dress with a tulle-covered hoopskirt — and accidentally flashed her underwear! (Or, with legs like those, maybe she meant to!?) 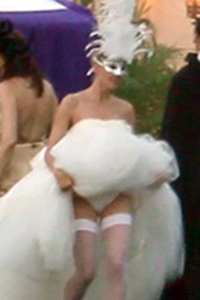 Married since 2005, the couple renews their vows each year and picks a different theme for the occasion. In 2009, Klum wore Bo Derek braids and Seal wore a mullet wig for their vow renewals.

“It’s about remembering this moment of love we gave to each other and reinforcing it. It’s so special to us, something we love and something our children have gotten accustomed to. It’s like, ‘Hey, Mom and Dad love each other and they get married every year!'”

What do you think of Heidi and Seal’s yearly vow renewals: Is it over-the-top or sweet?