Charlie Sheen is teaching his kids the important things in life, starting with vocabulary. In fact, this weekend he taught his twins a brand new word — rehab. 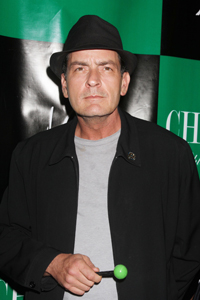 Charlie Sheen spent last weekend with his twin boys Max and Bob, his first since a judge took custody away from him back in March. Being an ever-so-responsible parent, Sheen took the opportunity to teach his boys some valuable lessons.

“I am teaching them words, because they’re speaking now,” Sheen told TMZ. “I’m teaching them the word ‘rehab’ so they always know where their mom is.”

Their mom is, of course, Brooke Mueller, Charlie’s recent ex who, to be fair, does spend an ample amount of time in treatment centers. And Brooke is so not amused by Charlie’s latest joke at her expense.

“Brooke is closely monitoring what Charlie is telling the press, and most importantly, their twin sons, Bob and Max, about her,” a source told RadarOnline.

“Under the terms of their divorce settlement, Charlie isn’t allowed to publicly speak about Brooke in any negative way, and Mueller is convinced he is violating that agreement. Charlie is saying things that she believes are an attempt to make her look like a bad mother and she’s had enough of it.”

“Brooke spends her nights at home with the boys,” the source explained. “She is in an outpatient rehab program that allows her to be at home at night. She has her sober living companion there with her and her parents are helping her too. She feels it is outrageous for Charlie to be joking about her being in rehab in front of their kids.”

“Brooke has been with the boys every day, and she can’t believe that the first thing Charlie does when he sees them is to attempt to make her into a bad mother.”

“If he keeps it up, she’s going to court to stop him.”

It’s not Brooke’s fault that her lack of tiger blood prevents her from overcoming her addiction merely with warlock mind power like Sheen apparently can.