Katie Holmes was seen out running errands and the paparazzi got a picture of Mrs. Cruise with what appears to be a baby bump — or was it just a big lunch? Will Suri be having a sibling to play with? 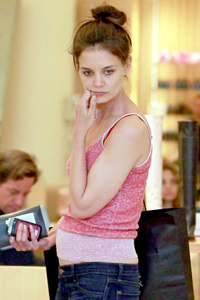 Katie Holmes can’t have a big lunch or forget to hold her stomach in without someone claiming she is pregnant and sporting a baby bump. The 32-year-old actress was spotted running errands over Mother’s Day weekend and was photographed looking slightly more bumpy than normal.

In the photo, she is wearing a pink tank top that is riding up slightly over her small gas bubble, er, bump. This caused an instant Katie Holmes bump watch to begin! After all, five-year-old Suri is probably ready for a sibling to play with. But, alas, it appears the Katie Holmes pregnancy rumors have been put on ice, as her rep denies the rumors.

“She’s not pregnant and this photo looks doctored,” her rep told E! News.

In fact, Holmes implied that she and Tom Cruise may be content with Suri and his two adopted children with ex-wife Nicole Kidman. “I’m not worried about it. Suri’s got really good friends and great cousins, so I feel happy about it. We have a really busy household, and it’s really fun and fulfilling. There’s always something going on.”