LA Lakers star Lamar Odom has been off his game — and the loss to the Dallas Mavericks during the NBA Playoffs has left many to wonder if the basketball star is having a hard time juggling his reality show, Khloe and Lamar, and his high-pressure basketball career. 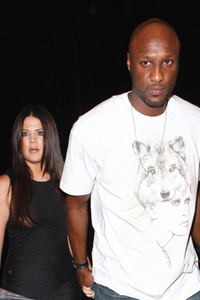 Lamar Odom hasn’t been himself lately — and his meltdown geared towards Dallas Maverick player Dirk Nowitzki after the Lakers were blown out of the playoffs has many wondering: Is Odom crumbling under the pressure?

Besides juggling his newlywed status with Khloe Kardashian, Odom is dealing with having the cameras follow him non-stop as he films his E! reality show, Khloe and Lamar.

“By the third or fourth day, I realized how tough and demanding it was going to be,” Odom admitted to the LA Times. “I was like, ‘I don’t think I could do this.’ But we worked through it. What I do is, like, usually on a game day, I won’t film, because I have to have my mind in a certain place and I have to rest my body.”

Why didn’t Khloe and Lamar film during the offseason?

“I said to Lamar during our first meeting that we would shoot during the offseason, and he was like, ‘No, no, no. I’m boring when it’s offseason,'” producer of the show, Jeff Jenkins, says. “Lamar’s career is as a basketball star, and we don’t want to ding that in any way. We’re not filming the Lakers to reveal strategy or team secrets.”

Odom himself said that his teammates were concerned that it was going to be too much pressure for him. “The Lakers, of course, had their concerns when I went into this, but I made the promise to them that I would remain the same player, if not try to get better.”

That didn’t seem to happen — in fact, many Lakers fans feel that Odom’s head seems to be somewhere else. Just as Jessica Simpson was blamed when Dallas quarterback Tony Romo lost, Khloe feels like she will be blamed.

“If he has a bad game, I know in the back of their heads, the NBA wants to blame this show,” she says. “I don’t ever want him to feel pushed or stretched out too thin.”

Adding to the pressure, many are wondering if Odom will be traded from the Lakers. If this happens, what will happen to their reality show? Will Khloe move with him?

Tell us: Do you think Lamar Odom’s reality show is to blame?