Sonny and Cher’s daughter-turned-son Chaz Bono does his first interview ever on The Oprah Winfrey Show today, May 9. Chaz opens up to Oprah about the gender reassignment surgery that was the end of Chastity Bono, how his mother Cher has handled his journey, his new book Transition: The Story of How I Became a Man and the documentary Becoming Chaz, which hits OWN on Tuesday.

Chaz Bono’s journey is not what many would call a secret, but this week, the tale of Sonny and Cher’s daughter-turned-son is going totally public. Bono’s new tell-all book is out, his gender reassignment transformation documentary, Becoming Chaz, premieres tomorrow on OWN and today, he’s opening up to Oprah Winfrey. 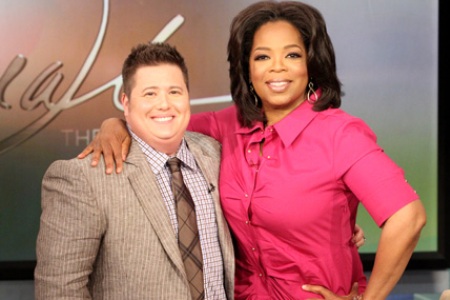 Today, Chaz Bono takes the hot seat on The Oprah Winfrey Show, with fiance Jennifer Elia by his side. During the chat with Oprah, Chaz opens up about his life-altering decision to say goodbye to Chastity Bono and introduce the world to Chaz Bono and he also shares footage from the gender reassignment surgery, itself.

“Life was always so much more difficult,” Bono tells Oprah of life before surgery. “Especially going into puberty, it felt like the expectations around me started to change or how I was supposed to act; but it also felt as if my body was literally betraying me. I went from a very athletic, straight up and down little kid to a very curvaceous woman. It was just horrifying to me.”

While Bono’s thrilled that surgery and injections helped him get rid of those breasts, however, he doesn’t have any designs on swapping a penis for his vagina. “At this point, I really don’t have any plans to do bottom surgery,” he said. “I feel really good, I feel like a man now, and I’m really happy.” 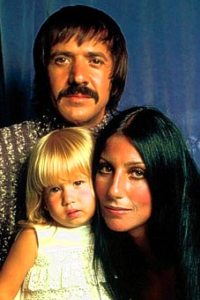 Bono also tells Oprah that his gender transition hasn’t been easy for his famous mother, Cher, who reportedly still uses female pronouns when talking about Chaz in the documentary, Becoming Chaz.

“The hard thing for my mom is that because she is a public figure and because she has this personality of being so cool about stuff and progressive, people forget that she’s a parent,” Bono tells Oprah. “The truth is a lot of parents never speak to their transgendered kids again. That’s not the case in my family. There’s no doubt about her love for me.”

In fact, Bono says his mom finally has a handle on using the right pronoun, while his life in general is going better. “Now, everything is so easy and effortless,” he says. “I feel like I’m on the same playing field as everybody else.”

Oprah’s OWN network snagged the rights to the documentary on Chastity Bono’s gender reassignment transformation, Becoming Chaz. The film premiered at the Sundance Film Festival in January and hits OWN on Tuesday, May 10, 2011 at 8 p.m.

With a book and documentary to promote, Chaz Bono is doing the press circuit and is also set to appear on Nightline tonight, Monday, May 9; Good Morning America Tuesday and The View Thursday.