News of British model and actress Kelly Brook’s miscarriage has been confirmed. At nearly five months pregnant, Kelly was rushed to the hospital but lost the baby girl she and boyfriend Thom Evans were expecting. 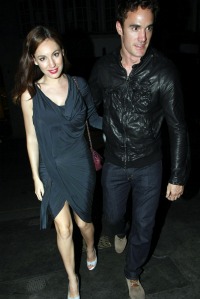 It was only in March that Kelly Brook went public with the happy news of her first pregnancy. “Thom and I are happy to announce we are expecting a baby girl,” the 31-year-old wrote on Twitter. “We are delighted XXXXX.”

The baby girl would have been the first child for Kelly Brook and boyfriend Thom Evans, a retired rugby player. The pair had been dating only a few months when Kelly discovered her pregnancy. No word yet on what symptoms sent the model rushing to the hospital last week.

A rep for Kelly told the Daily Mail, “I can confirm that Kelly and Thom have very sadly lost their baby. They request that everyone please respects their privacy at this very painful time. There will be no further comment.”

Kelly is said to now be resting at her farmhouse in Kent. A friend of hers commented, “Kelly is understandably devastated, she’s at home and she’s being looked after by Thom and her mum Sandra. There’s nothing you can say to anyone at a time like this — she just needs to be allowed some time alone to grieve.”

Celebrities were quick to take to Twitter and offer their condolences to Kelly Brook.