We just got an early photo from Abraham Lincoln: Vampire Hunter. Yes, our 16th president fights fanged foes in the new film.

Production has begun on the movie Abraham Lincoln: Vampire Hunter, the film based on the mash-up novel by Seth Grahame-Smith. (He’s also the author of Pride and Prejudice and Zombies.) 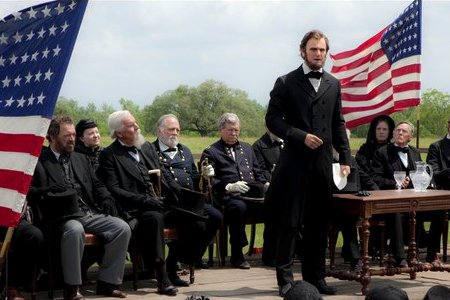 In case the title isn’t clear enough, here is the deal: Lincoln’s grandfather and mother were killed by vampires. When the young future president learns this, he vows to kill every pointy-toothed blood sucker in the country. And there are quite a lot! They’re also involved in the slave trade, fueling his resolve. But not all vampires are bad.

The film follows Lincoln from his youth through his assassination and beyond. A New York Times article (they got an early set visit… I’ll be visiting myself this coming week) tells us that director Timur Bekmambetov calls this film a cross between D.W. Griffith’s Abraham Lincoln and F. W. Murnau’s Nosferatu. They also plan to make the film even more historically accurate than the book.

The first photo gives us a look at Benjamin Walker as Lincoln, making a speech, surrounded by dignitaries… but no blood suckers. The vampires, it seems, are being kept under wraps. The film also stars Anthony Mackie, Dominic Cooper, Mary Elizabeth Winstead, Alan Tudyk and Rufus Sewell, and will be released in 3D on June 22, 2012.