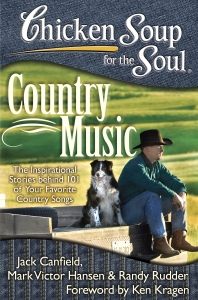 Country music is by far one of the most popular genres within the music industry, so it was only a matter of time before the iconic book series found themselves giving a tribute to a truly American musical art form.

Chicken Soup for the Soul exclusive

I had written a song called I-L-O-V-E-Y-O-U, Do I have to spell it out for you? and I kind of laid it aside. That inspired D-I-V-O-R-C-E. It’s interesting because I eventually did finish the first song and Tammy Wynette recorded it on an album years later.

I finished D-I-V-O-R-C-E but there were no takers. I asked Curly Putman one day why he thought nobody had wanted to record it. He said, “Well, there’s that one line in the chorus, ‘I wish that we could stop this D-I-V-O-R-C-E.’ That melody is too happy for such a sad song.”

I said, “Well, what would you do?” He grabbed a guitar and started playing it and sang a new melody for that line. He changed the melody around and made it a lot sadder and a lot darker sounding — that’s about all Curly did, but it made the difference, I think, between being recorded and not being recorded.

I think that really closed the deal. My melody sounded more like a detergent commercial than a song about divorce. I wanted to give him half the song, but he didn’t want any of it. We compromised and he took a fourth of it. When we sat down to do the demo, Curly was playing guitar and I was playing piano, and I came up with that deep piano lick at the beginning of the song — “Bom-bom-bom-bom-dum-da-dum.” Billy Sherrill later decided to keep it on the record.

They used to have a local Grammy banquet here in town and I saw Billy Sherrill there and told him about the song. He said, “Well, bring it over tomorrow.” So I did. He later told me he was looking for one more song for Tammy and said when he heard it he threw all the other stuff he had for her in the garbage can. He instinctively knew that was going to be a big hit for her and it was. It went to number one in 1968.

There were other songs of mine that were inspired by divorce, but I don’t think this one was. I had a daughter who was about a year old then and I always thought it was cute the way parents spell things out for their children when they don’t want them to know what they’re talking about, so I just wrote it. There may have been other reasons or inspiration behind it at the time, but if there were, they escape me now. I think I just wrote it for the money. But Tammy had a lot of heartache in her life, so it seemed she really related to the lyrics.

By today’s standards, it almost seems like a corny song to me. But Tammy just sang the hell out of it and Billy Sherrill did a great job producing it. They made a great record.