Whitney Houston is battling her drug demons in an outpatient rehab program. Will the third time be the charm? 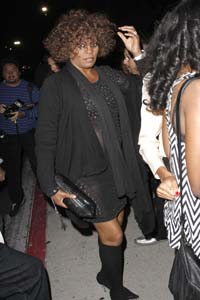 Whitney Houston’s daughter Bobbi Kristina Brown claims up and down that she doesn’t have a drug problem. However, it looks like her mother still does: Whitney Houston is back in an outpatient drug rehab program.

“Whitney Houston is currently in an outpatient rehab program for drug and alcohol treatment,” her rep told People Monday. “Whitney voluntarily entered the program to support her long-standing recovery process.”

Houston first went to rehab in 2004 to deal with her addiction to crack cocaine.

“I partied a lot. Trust me: I partied my tail off,” Houston told Diane Sawyer after she went to rehab. “You get to a point where you know the party’s over.”

The I’m Every Woman singer famously dismissed rumors of her addiction, declaring that “crack is whack” when questioned. However, she later told Oprah that a lot of the problem was her then-husband, Bobby Brown.

“There were times when he would smash things, break things in the home,” Houston told Oprah of Bobby Brown’s abusive ways. “Glass. We had a big, big giant portrait of me and him and my child. He cut my head off the picture. Stuff like that. And I thought, ‘This is really strange.’ So I figured, cutting my head off a picture — that was a little much for me. That was one sign.”

An addiction to crack is a notoriously hard one to overcome, so we applaud Houston’s effort to continue treatment. Plus, we hear that a Waiting to Exhale sequel is in the works — and we really, really, really want to see Houston on the big screen again.

Do you think Whitney Houston can tackle her drug addiction once and for all?