Is Glee‘s Chord Overstreet dating Emma Roberts? The pair has been spotted getting cozy on both coasts! 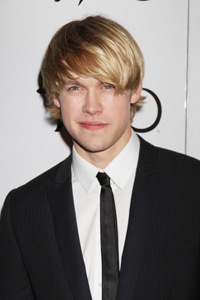 Chord Overstreet and Emma Roberts would make the cutest couple, wouldn’t they? The Glee hottie and the Scream 4 cutie think so too — at least, they did for a weekend.

But the thrill was gone already by the next day. “She was leaning into him,” a witness said, “but he seemed way more interested in his food.” Hope it wasn’t her admittedly small boobs that turned him off.

The pair was spotted again at a bash for Nylon magazine in NYC recently, but a source told Celebuzz this meeting was far less hot and heavy.

“They talked briefly for a while outside and again near Emma’s table, but there wasn’t any PDA,” a partygoer said. “It was almost like they were purposefully trying to keep their distance. They didn’t interact too much at all for people that are even just friends!”

Overstreet and Roberts left the party separately, giving us nothing more to wag our tongues about.

By the by, Overstreet was tied to Taylor Swift as recently as February. We’re sure there’s a song about it in the works.