Justin Bieber is a brat — but a halfway decent actor, says his CSI costar Marg Helgenberger. 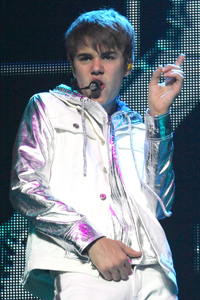 Justin Bieber was an enfant terrible on set while filming his guest starring role on CSI, says actress Marg Helgenberger.

Veteran actor Helgenberger, who plays blood spatter analyst Catherine Willows on the hit show, spilled the beans during a French radio interview — but it wasn’t all diss. She says that while Bieber was a total brat, he wasn’t a totally bad actor.

“Justin Bieber wasn’t bad,” Helgenberger said. “He had never acted before. I shouldn’t be saying this, but he’s kind of a brat. He was actually very nice to me, but he locked one of the producers in the closet. And he put his fist through a cake that was on the table.”

“I am pretty open to whoever comes on the show,” Helgenberger continued. “If someone is a jerk, that bothers me. If they’re a so-so actor, it doesn’t bother me. [Bieber] is actually better than you’d think!”

Bieber usually unleashes his inner brat on Twitter, so a real-life sighting is a treat.

You tell us: Was Justin Bieber acting like a brat or a typical teen?

read on for more Justin Bieber