After much speculation, Meredith Vieira confirmed she will be leaving the Today show in June. 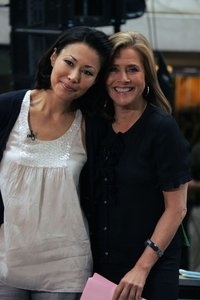 Meredith Vieira announced she’ll be stepping down from her Today show seat in June and Ann Curry will be stepping in as previously reported. The confirmation came during Monday’s Today show broadcast.

“After months of personal reflection and private conversation with my family and friends, I’ve decided to leave Today in June,” she said on the May 9 show.

Vieira added, “Time… keeps ticking away and I want to spend more with my husband Richard and my kids Ben, Gabe and Lily.”

Meredith Vieira took over the reigns of Today when she filled the big shoes of Katie Couric back in 2006 and she’s been a welcome face ever since!

Ann Curry has been a staple with the Today show from as far back as 1997, so joining co-anchor Matt Lauer should be an easy transition. Taking over Ann Curry’s former spot on the team will be Natalie Morales.

What do you think of the new team getting set to make a summer splash in June? Will Ann Curry and Matt Lauer make a co-anchor match in morning show heaven? You won’t have to wait much longer! June is just around the corner and so is the debut of the new Today show team!

Congrats to Ann Curry and good luck to Meredith Vieira!