The latest news out of Hollywood completes the search for The X Factor host — or should we say hosts? It is confirmed! Nicole Scherzinger and Steve Jones will co-host the highly anticipated Simon Cowell project! 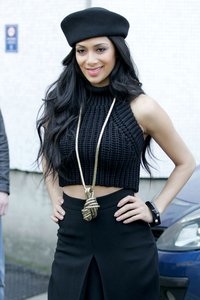 The X Factor began its first round of taping over the weekend, which left lots of speculation as to who the host and final judge would be. Don’t worry — we’ve got you covered.

It has been confirmed! Nicole Scherzinger and Steve Jones have been selected to co-host Simon Cowell’s American version of The X Factor! The news was confirmed just in the nick of time — right before Sunday’s first taping!

Simon Cowell told Us Weekly he has nothing but confidence in the duo’s chemistry! “These two are going to be great together,” Simon Cowell said.

The successful Brit added, “I have always wanted Steve to work with us; I think he is a real star. Nicole is fantastic. I loved working with her on the U.K. X Factor last year. She is gorgeous and super-talented.”

The addition of Nicole Scherzinger and Steve Jones, who is a British TV host in his own right, puts them in a pool of big names on The X Factor, including judges Simon Cowell, Antonio “L.A.” Reid and Cheryl Cole.

Nicole Scherzinger and Steve Jones aren’t the only names being thrown into the confirmation pool! It looks like Paula Abdul is set to join Simon Cowell at the judges’ table! The former American Idol judge is said to have closed the deal on May 8!

The X Factor is set to debut in the fall and boasts a hefty prize for the winner — a $5 million recording contract! Congrats to the newest additions on The X Factor!