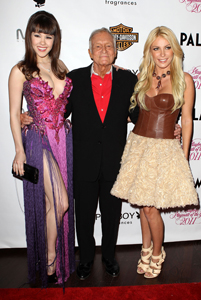 Claire Sinclair has been crowned the 2011 Playmate of the Year by magazine founder Hugh Hefner! The October 2010 Playmate accepted her award in a plunging violet and fuchsia gown that left little to the imagination.

Hefner, who was joined by fiancée Crystal Harris, presented Sinclair with the honor which includes a custom-designed Harley Davidson and $100,000 cash.

Sinclair just happens to be dating the flesh mogul’s son Marston Hefner, but Hef insists the win has nothing to do with the family love connection.

“It is not related,” he told the Las Vegas Review-Journal, “in any manner, shape or form for the fact that she happens to be dating my son. The decision preceded the dating.”

He continued, “I think it was obvious to me from very early on because she represents, uh, she has a particular kind of look that is classic and iconic and reminds one very much of the pinups of the past.”

“She is kind of a cross between Bettie Page, who was an early Playmate, and Barbie Benton. She is a bigger version of Barbie. Barbie was more petite.”

At just 19 years old, Sinclair is the youngest Playboy Playmate of the Year since Donna Michelle, who was 18 years old when she was chosen in 1964.