Pretty boy David Beckham is fine after a car accident in Los Angeles on Friday morning. 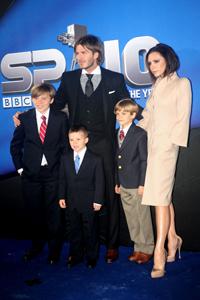 Beautiful, beautiful man — oh yeah, and soccer great — David Beckham needs to learn how to keep his eyes up when he’s behind the wheel. The L.A. Galaxy player was involved in a car crash Friday morning on a Los Angeles freeway that sent the other driver to the hospital.

Beckham was driving his Cadillac with son Brooklyn beside him when he accidentally rear-ended a Mitsubishi that was stalled in the car pool lane on the 405 freeway.

“David swerved to avoid a stalled vehicle in the car pool lane and clipped the vehicle,” Beckham’s rep told E! News. “Thankfully, he and Brooklyn were not injured.”

The driver of the stalled vehicle may not be so lucky, though — he was taken to the hospital as a precautionary measure after complaining of neck pain.

Beckham was not cited and was sent on his merry way, hopefully to deliver some Rocky Road to pregnant wife Victoria Beckham.